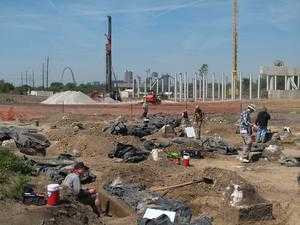 CHAMPAIGN : As the 34-acre excavation started to show a 1,000-year old city — which researchers currently understand is linked to the Cahokia Mounds State Historic Site in Collinsville — many outside the job did not understand the significance of what they were digging up.

And now, as data and advice from that multi-year excavation printed and is being further examined, the job is getting international recognition.

The Shanghai forum awards are presented for important discoveries which modified or have advanced knowledge of the human past, locally or worldwide, based on Angie Patton with the survey. The excavation, which finished in 2012, was financed by the Illinois Department of Transportation, since the excavated property was part of the building region of the new Mississippi River bridge and Interstate 70 realignment in the East St. Louis region.

Going in, archaeologists already understood that mounds existed in the overall region of East St. Louis, and preceding quite small scale excavations had revealed discoveries, Emerson said, but they’d no idea they were going to unearth a 1,000-year old urban settlement.

“It really turned into a fantastic job,” said Emerson, who supplied some numbers to place it in outlook.

More than 2 million cubic feet of soil was removed. At the peak of the almost four years of constant field work, as many as 100 archaeologists were digging there and finally unearthed 33,000 ceramic containers (pots and dishes) and a fully undamaged figurine similar to others discovered north of Cahokia.

Itis a kneeling girl holding a shell cup, which, such as the colour crimson, was connected with fertility in Cahokian culture.

Some constructions were some square, perhaps a sweat lodge or assembly place, he said, and ring-shaped. But most were likely houses, he described — post-and-framework constructions with branches weaved and thatch on top of that. He said they consider they looked like a standard gable house, usually 12-15 feet long and 6-8 feet broad.

There is guess they were used to indicate a holy centre or ritual place.

“No one actually has a hint,” Emerson said. “But that was something really unusual.”

In addition they do not understand why, like Cahokia, where signs shows “everybody is gone” by 1300 AD, the East St. Louis excavation revealed that urban area was left by 1200.

“This was not a few buffalo hunters following a herd,” Emerson said.

“So the remainder of it’s still in the earth in a location which is developed,” he said.

He said there is been a drive to find a means to maintain it, along with a move to turn Cahokia into a national park, which might help maintain the East St. Louis site.

“It’s been a great time, plus it is great for the university and for the survey, and great for Illinois,” he said.