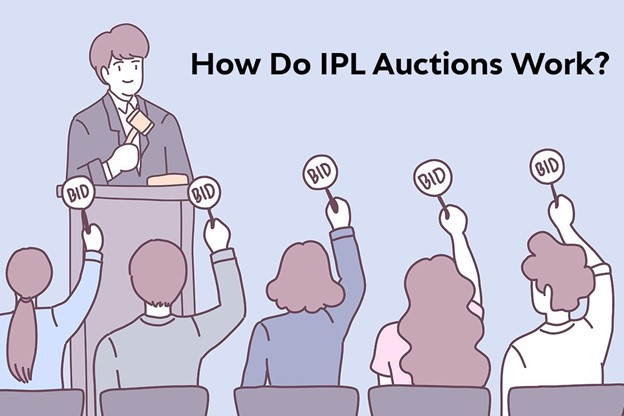 How Do IPL Auctions Work?

Thanks to the craze for cricket events, numerous major tournaments and leagues are held throughout the year to ensure fans remain entertained. One of the most renowned cricket tournaments globally is the Indian Premier League (IPL).

The onset of the IPL excites fans since it offers them numerous opportunities, including using a fantasy cricket app to create teams and predict the outcomes of matches. However, players remain excited even before the tournament officially starts, i.e., they anticipatedly wait for the IPL auctions, a yearly event conducted by the BCCI to auction cricket players to different franchises.

This article will shed light on how IPL auctions work by covering different aspects related to them. Let us dive right into it:

The IPL auction is a very important event for IPL fans since it offers them insight into their favorite team’s composition. It is a multi-day event broadcast live on television channels or OTT platforms.

In the annual IPL auction, players present in the common pool are sold off to the highest bidder. However, there are specific rules and regulations that bidders need to abide by when it comes to acquiring players.

Throughout the event, many purchases are made by the owners of teams participating in the Indian Premier League. After battling continuously to acquire the best players, some teams return happily, whereas others get to rethink their decisions during the event.

The auctioneer is deemed the host of the event since he is the one who makes all the announcements, such as the names of players, their base prices, the raised prices, etc.

Besides making important announcements, the auctioneer also has numerous other responsibilities. He keeps an eye on the representatives of all franchises to determine which ones placed the bids first. Besides this, he also resolves issues or conflicts whenever they arise.

Richard Madley was the auctioneer for the first ten years of the IPL. However, in 2018, BCCI awarded the contract to High Edmeades, a renowned charity auctioneer from the U.K.

Budget of Each Team

To ensure fairness, there is a set budget for every franchise included in the IPL. Every team has a limit of 80 crores using which they are required to create a team comprising domestic and international players.

Even though the teams need not spend their entire allocated budget, they must spend at least 75% of the total amount, which comes down to approximately 60 crores.

Based on the budget, teams create an effective strategy that covers numerous financial aspects, such as the money they can spend on targeted players, the ones they can retain, etc.

Different Types of Players in the IPL Auctions

Base Price of Players

In every IPL auction, each franchise must officially ensure that they have at least 18 or a maximum of 25 players on their roster. However, a team cannot acquire more than eight foreign or overseas players.

Even though they cannot exceed the set limit of foreign players, teams don’t need to acquire international players in the auction. For instance, if a team wishes to have a total of 25 players, they can go for all capped and uncapped Indian players.

Regarding match days, the rules state that no team can include more than four foreign players in their playing XI.

Like in every other tournament, players in the IPL also have official contracts. When they expire, the players are treated as unsold players, which any franchise can acquire. However, every team in the IPL is allowed to retain a few players.

According to the latest regulations issued by the BCCI, IPL teams can retain up to 5 players as an essential part of their pre-auction retention in combination with the RTM policy, which is an option to the current franchise owner of any player to match the price of players sold during the auction to retain them.

The Fate of Unsold Players

Any player who does not get acquired by an IPL team in the first round can be purchased by teams in the subsequent rounds. The rounds keep happening until all the IPL teams fulfill the minimum requirement for their roster. Players who remain unsold till the very end still have a chance to get acquired in the accelerated bidding round.

The IPL auction is a lengthy event wherein many transfers, purchases, and retentions happen. Due to its interesting nature, millions of people watch the event religiously every year.

Published in Cricket, Entertainment and Sports