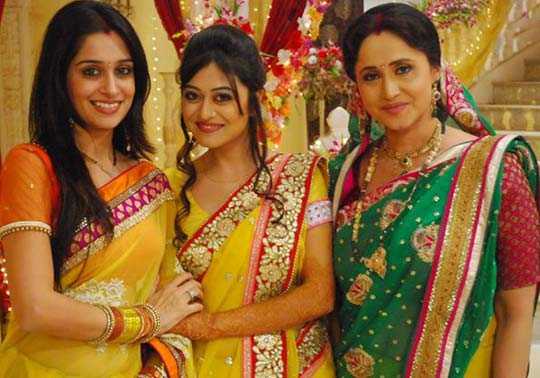 With Simar inquired Anjali is it your birthday now to understand yes in the last night episode of the TV series Sasural Simar Ka started and she is wished by Simar. Simar in her heart thinks like she used to look in her childhood days that however, Anjali seems the same. Prem shares memorable time with Anjali.

Mata Ji requested to Prem that I know you are upset as you were not given first bite of cake by Anjali but Prem says nothing like that. Simar sees Prem from Ghunghat and she feels romantic.

Simar got tears in her eyes and looks on. “Hamari Adhuri Kahani”…. plays Simar got teary eyes. Now Prem sees Simar and he wonder who this woman in Ghunghat is. He feels she must be Simar as in her fingers Prem detected their wedding ring. As she realised that Prem is coming to her now Simar run away.

Karuna also believes that the girl in Ghunghat is no one Simar, Simar is running, Prem is running to catch her.

Prem unable to catch her so he is shattered again “ Hamari Adhuri Kahani”…… Plays…. Prem and both began weeping as however, he’s not able to catch Simar and his fortune was cursed by Prem.

Rohan reveals the trophy to Simar and tops the examination, Simar congratulates him. Piyush also passed the test. Sumit gives credit to Simar for all these achievements of children but then by calling Piyush an average pupil Simar is taunted by Rita. Piyush feels hurt but Siamr describes to him what is morality.

Anjali now determined to became version but somehow she’s been seen dissing Amar as Amar tries to speak something in the issue of Bharadwaj house. So Prem asked to her that you will lock in here till you WOn’t learn manners and locked Anjali in a room.

Precap: As Rita believes that her perfect governing was proven by Simar unable to Rita decided to throw Simar out of the house.