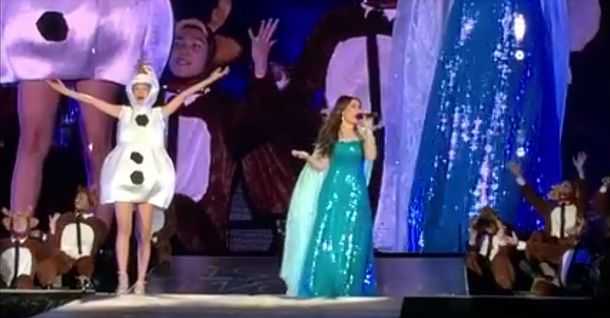 Demonstrating that you aren’t frightened to make a fool out of yourself on Halloween isn’t uncommon, but Taylor Swift’s decision to dress as Olaf the snowman from Frozen and sing “Let It Go” with Idina Menzel was one of the holiday’s more outrageous happenings.

The combination of Tay and the hit Disney film on stage in Florida was just too much for many fans, who shortly flooded Twitter with gushing messages and weeping emojis declaring that they “actually cannot cope with this”.

Swift has been making a habit of inviting high profile guests to join her but the performance of Saturday night readily took the prize for greatest so far.

“Frozen fully happened tonight and 55,000 individuals sang ‘Let It Go’ so loud, it almost took my breath away,” Swift wrote on Instagram, while Menzel thanked the 25-year old for giving her “an out of body experience”.