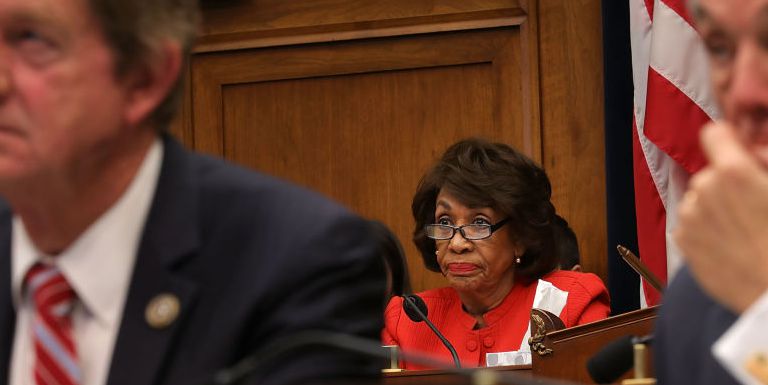 Hello and welcome to another edition of America’s favorite game show, They Really Tried It, with your host, Representative Maxine Waters. Today’s contestant is Rep. Mike Kelly of Pennsylvania (R) who, on Tuesday, took it upon himself to point his finger at Rep. Waters, shake it like a Polaroid picture, and tell her to stop talking about discrimination.

I’m already exhausted. In a video that comes from @FCSDems, an informational service that also doubles as a Maxine Waters fan account, Kelly attempts to call Waters out but it goes straight to voicemail. Waters, in turn, reminds him and all of us, just who she is. In so doing, she also coins a new catchphrase for the kids, but we’ll get to that in a second.

Rep. Kelly, who in the video of the exchange is the kind of hype you imagine Twitter trolls with three followers are, really thought that he could take it upon himself to tell Rep Waters, well, anything. Well, audience, we have the results and it turns out, he could not.

The dispute started, as most basic misunderstandings of intersectionality do, with a discussion of auto lending. The Trump administration and Congressional Republicans are trying to roll back Obama-era legislation (how many times has that phrase been written) that prevents auto lenders from discriminating against potential buyers. The legislation, S.J. Res. 57, seeks not only to repeal the guidelines and permanently prevent Congress from ever again enacting anything similar.

Trump seems hellbent on rolling back everything that President Obama did. Tomorrow he’s outlawing tan suits and next week he’s rolling back the death of Fidel Castro and putting Cuba back on the no-no list. It’s amazing to witness the work of a president whose policy handbook comes straight from Biff Tannen of Back to the Future. I would not be surprised to find out Trump is working on a time machine so that he can go back and prevent Obama’s birth. I’m fine with that, actually, because he’d send himself back to Kenya in 1961 and spend the rest of his days fruitlessly nosing around hospitals like a low-rent Herod.

Back in the present, Rep. Kelly wasn’t satisfied to just make whatever point he had about keeping all the Whos in Whoville from enjoying Christmas, and thought it was a good time to lecture Waters. “We’re making America great,” he said, apparently without irony. “And the best way to do that is to stop talking about discrimination.”

The temerity of this comment! The Tia and Temerity! Is that how America gets great? I must have missed that lesson in Be Best training.

The chair reminded all members that their remarks should be directly to him and not one other and then called on Rep. Waters. Waters, approached the mic cool and collected like an icon at a sold out Madison Square Garden concert. It initially looked like she was going to address the chair but then she pivoted and called out to Mike Kelly. “Mr. Kelly, please don’t leave because I want you to know that I am more offended as an African-American woman than you will ever be.”

An unseen congressman tried to interrupt Rep. Waters. That was a mistake. Then the chair interrupted Waters, asking her to direct his remarks to him. “I respect the chair but don’t stop me in the middle when you didn’t stop him in the middle, and so I will continue.”

And so I will continue!

I am slain! Please put those words on my tombstone. But, “And so I will continue” is not even the greatest new catchphrase that Rep. Waters blessed the masses. She finished her remarks, over the loud but ineffective protestations from Kelly, getting in a comment on the president. Kelly, it seems, asked her if she would yield the rest of her time, which is both a parliamentary procedure and also completely laughable. Rep. Waters’ response: “Having said that, I reserve the balance of my time. I do not yield. Not one second. Not one second to you. Not one second!”

HONEY. This is my new life motto! Cut to me, bursting into brunch, giving champagne to my real friends, and real pain to my sham friends, telling everyone the whole truth and nothing but the truth, and then concluding with, “I reserve the balance of my time!” And then leaving them all in silence.

Not one second! I live!

Not that I know I cannot yield one second, it’s over for the rest of you. Not one second! Maxine Waters, queen of all increments of time, does not have a blink of an eye for your nonsense. Having said, that, I reserve the balance of my time. Please do not click away from this page until my time has expired.