“I Have Endometriosis – But Nobody Understands It”

FYI: March was Endometriosis awareness month… but do you even know what that is? I didn’t. Info on the condition is scant, so people just don’t understand it. It’s even described as a ghost disease: the pain is very real to the sufferer, but it’s not visible on the outside.

For this reason, sufferers often don’t get the support they need and deserve. They’re misjudged as over-dramatic or lazy. But endo affects so much more than just a woman’s body. It gets to your relationships, sex life, fertility and career…

Endometriosis is a condition where tissue, similar to that found within the uterus, grows outside the uterus in areas such as the ovaries, Fallopian tubes and bowel. As hormones change during the menstrual cycle, this tissue acts in the same way as the endometrium – it builds up and breaks down. Unlike the endometrium, though, the blood and tissue have no way to leave the body. Instead, this causes inflammation, painful scar tissue and adhesions. Ouch. A laparoscopy is used to diagnose the disease and can be used to treat endometriosis.

“The statistic commonly cited is that it affects one in 10 women and that an estimated 175 million women worldwide have the disease,” says Dr Rizwana Roomaney, a women’s and reproductive health lecturer from Stellenbosch University. In the UK, the average length of time between the onset of symptoms and actual diagnosis via laparoscopy is eight years. In the USA, 12 years!

“There isn’t any cure for endometriosis,” says Roomaney. “But there are various ways of managing the pain and symptoms associated with the illness.” Doctors usually ‘laser’ the endometriosis, but there are other treatments, like oral contraceptives (for women who don’t want to conceive), various hormonal therapies (which usually have side effects) and surgery.

According to Roomaney, the best type of surgery is excision surgery (cutting out the endometriosis, as opposed to ‘burning’ it), as this has a lower recurrence rate. But, unfortunately, there are very few gynaecologists in South Africa who have the necessary surgical skills to perform excision surgery.

Lindsay Speirs Du Toit suffered from constant ovarian pain growing up. Looking back now, she realises that she always had endometriosis – she just didn’t know what it was. High school was tough, since it’s not on the list of topics to discuss during Life Orientation or The Talk With Mom. “We’re just told that what we’re feeling is normal,” Lindsay says.

“Imagine being told off by your teacher when your heavy bleeding requires you to visit the bathroom, again. Or your hockey coach telling you how pathetic you are for having no energy on the field, or not wanting to do sport because of the pain you are feeling.” Lindsay explains. “I was labelled as lazy or disinterested.” Little did they know how much pain she was dealing with on a daily basis.

READ MORE: This Woman Is Showing What It’s Really Like to Have Endometriosis

“I went to the gynae [for answers] at the age of 27,” Lindsay says. She was experiencing the worst pain she’d ever felt. The gynecologist diagnosed a cyst and sent her off with meds. But a little while later, with the pain still unbearable, she paid her gynaecologist another visit. This time, he suspected endometriosis, but he couldn’t confirm his suspicions without a laparoscopy – endometriosis isn’t visible on a scan.

The laparoscopy confirmed the doctor’s suspicions: she had endo, and underwent surgery to remove the tissue. “They removed what they could – what was visible to the naked eye,” Lindsay says.

READ MORE: Why Are Some Periods Worse Than Others?

Endometriosis is not experienced in the same way by all sufferers. There are different levels of severity. The symptoms include pain, heavy bleeding, bloating, fatigue and, sometimes, painful intercourse. Lindsay’s pain would become almost unbearable during menstruation. In a month, she’d only have about seven pain-free days. “Living with chronic pain is no joke and it takes strength from unknown places to put on a happy face.”

“I sometimes try and explain the pain to others – on a good day it feels like normal period pains, but on a bad day it feels like that times 20.” Other endo suffers have described it as equivalent to being kicked in the gut by five bodybuilders or having your internal organs wrapped in barbed wire.

READ MORE: 6 Signs You’ve Got An Ovarian Cyst That’s About To Become A Big Problem

The pain is constant, but the other symptoms come and go. “The fatigue is terrible – you lose the lust for life.” Lindsay remembers many road trips where she would simply stay in the car. She just couldn’t find the strength to get out and admire the view. “How do you explain to your partner or family members… I’m so tired, sad and in pain. They can only hear that so many times without rolling their eyes,” she says.

Lindsay stresses that it’s important to see a specialist once you’ve been diagnosed by your gynae. Her first laparoscopy left her with a couple of scars and a slightly deformed belly button. “It’s a terrible op where they put a camera through your belly button and make keyhole incisions in your tummy to cauterise (burn) the endo,” Lindsay explains. “They pump you full of gas for full visibility.” This gas takes a day to leave the system – this is the worst pain, but the holes hurt as well. 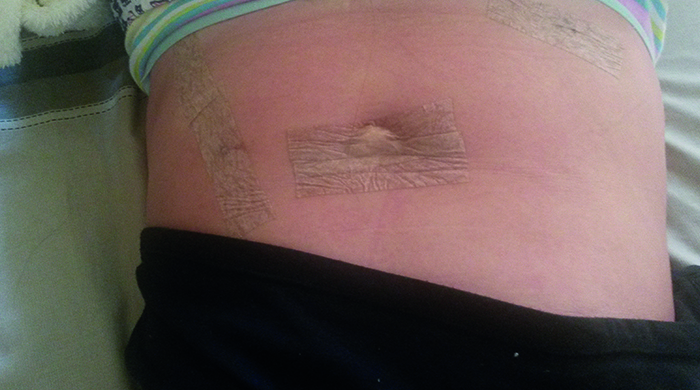 Lindsay was told to use the Pill to prevent her period, as this would lessen the symptoms, but after four months of embarrassing surprise ‘leaks’, she had to find a better solution. “I was then prescribed a pill that was like a male hormone,” she says. Besides costing a small fortune, she was warned that her voice may deepen and that facial hair may be an issue. No thank you! She was also told that she should have a baby straight away as she might not be able to have one at a later stage. Talk about rushed planning.

“So I took my chances and lived with the pain,” Lindsay admits. One year later and another laparoscopy down, Lindsay was again advised to have a baby. “It will cure [your endometriosis],” she was told. Dr Roomaney says that this is incorrect: endometriosis can develop after pregnancy and women in menopause can still experience symptoms.

READ MORE: 5 Types Of Period Cramps That Could Signal A Serious Problem

For Lindsay, this seemed to be the only way forward. But it was easier said than done. “The contraceptive Pill actually helps – it keeps you lighter and reduces the period pains… but in order to make a baby… no Pill.” It was a whole different world of pain. Three years later and still no baby, Lindsay finally visited a fertility specialist and underwent another laparoscopy. This time, the pain disappeared. “Everything felt better, I was energised, I started exercising and running,” she says. Lindsay was winning the endometriosis battle, but the fertility battle had just begun.

“When I was diagnosed, I was told that endometriosis affects fertility,” Lindsay begins. The battle to fall pregnant was a struggle she wasn’t prepared for. “It’s been equated to the same stress as fighting cancer,” she adds. “It’s painful, embarrassing, you feel like a failure, and it is so incredibly sad and unfair.”

“As soon as I fell pregnant, the specialists were no longer interested in me,” Lindsay says. The first few weeks of pregnancy were accompanied with terrible period-type pain and she was convinced she’d get her period. But then the pain was gone… Pure bliss. And after a fairly normal pregnancy, her baby was born.

READ MORE: What You Need To Know About Endometriosis And Your Fertility 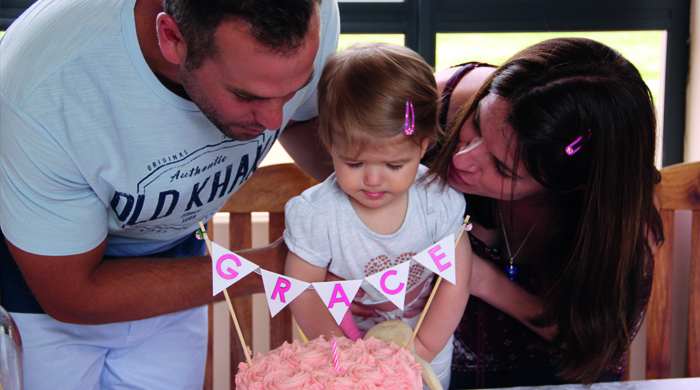 To the moms, listen to your daughters when they tell you that the pain they’re experiencing is not normal. Teachers, show more compassion and understanding. Bosses, listen to your employees and show empathy. To everyone, research, learn and show compassion. And finally, to the endometriosis warriors, keep on fighting!