Samira Wiley Is Using Her Voice

Like us, Samira Wiley only learned the true story of Moira, her character in Hulu’s authoritarian dystopia The Handmaid’s Tale, this season. In a recent Moira-focused episode, we saw June’s fiery friend carrying a baby to term as a surrogate, and in the process meeting the beautiful doctor Odette, who would later become her partner. The episode played it close to the vest; for most of the episode, it seemed possible that Moira, now a refugee in Canada, was searching for and mourning the child she’d birthed. But it was actually Odette, whom we’d only heard of briefly in the first season, whose loss she finally faced when Moira discovered her among photographs of the dead. Even Wiley herself didn’t truly know the extent of the sadness Moira had been carrying with her all along—”I only knew that Odette was her partner before Gilead; that’s truly all I knew.”

Filming the scene where Moira finally uncovers Odette’s fate was, Wiley says, “one of the most emotional things I’ve filmed ever.” The show’s emotional weather, stormy with grief, loss, and change, makes for difficult work. How does she cope? By downloading, albeit long-distance, with her own partner, Lauren Morelli: “We film in Toronto and I live in L.A., so I don’t have the luxury of being able to go home and sit down and talk to my wife face to face, so the first thing I do is call her or Facetime her to unload after the day.”

ELLE.com spoke with Wiley about the decidedly non-smile-inducing second season of Handmaid’s Tale, having to hide one’s authentic self from a cruel regime, and raising “awareness and visibility and positivity” for the LGBT community.

In April, you posted a caption to Instagram saying, “Go watch season 2 of Handmaid’s Tale—it won’t make you smile like this!” Which is true. I’ve found this season hard to watch, even more than the first one. How did you feel about it?

Yeah, the feelings people get when they watch it are probably exactly what we were feeling when we were watching and reading the scripts for the first time. That’s especially what I remember: getting the scripts and realizing what we were gonna be showing the world. We had ended the first season exactly where the book ended, so it really is surprising to read and then also once we filmed the show, so much of the storytelling comes specifically from how it looks; Handmaid’s has got a reputation now for the look of the show, so all of that together is very shocking.

Sometimes I have to take a break while watching.

I think that’s something to pay attention to. I always tell people this is not a show I would recommend for them to binge-watch. Your experience watching this season has been similar for me; I actually haven’t been able to watch it in the same way as season 1 at all. I’ve only seen a fraction of it because it’s hard to watch, and it’s hard to relive it.

We learned a lot about Moira’s backstory. How did you feel when you first read the scripts about the surrogate baby she birthed and her partner, Odette?

I was just delighted to know more about her. We know she has the ability [to conceive]—she would not have been a handmaid unless it was proven that she could reproduce. So to know the origin story helped me understand more about the character.

I always tell people this is not a show I would recommend for them to binge-watch.

In season 1, in one of the very early episodes she mentioned Odette, so that is something that I’ve had in the back of my head the whole time. To have an actress come in and be able to show that history, not just for my own understanding of who Moira is but also to the story and to audience…Moira is, along with all the other characters on the show, so interesting and three-dimensional. Their stories are widely different, even though they all are from this horrible place of Gilead. I feel like we could have a show and any one of these people could be the main character. I was really happy for people to see that.

When Moira is combing through records to discover Odette’s fate, she’s by herself. How was it to film that emotional scene?

It’s rare…Lizzie [Moss] does it all the time, but I am usually in a scene with someone else. It felt like the responsibility was on me. Kari [Skogland], who directed that episode, makes it such a safe space on set. I’m supposed to be in this room by myself, but there’s a bunch of people around and a camera on my face. It’s probably one of the most emotional things I’ve filmed ever, not just on the show. I remember when I was going through the books, the prop manager didn’t tell me what page the picture was going to be on. It just made it all the more real. It was intense, really intense. 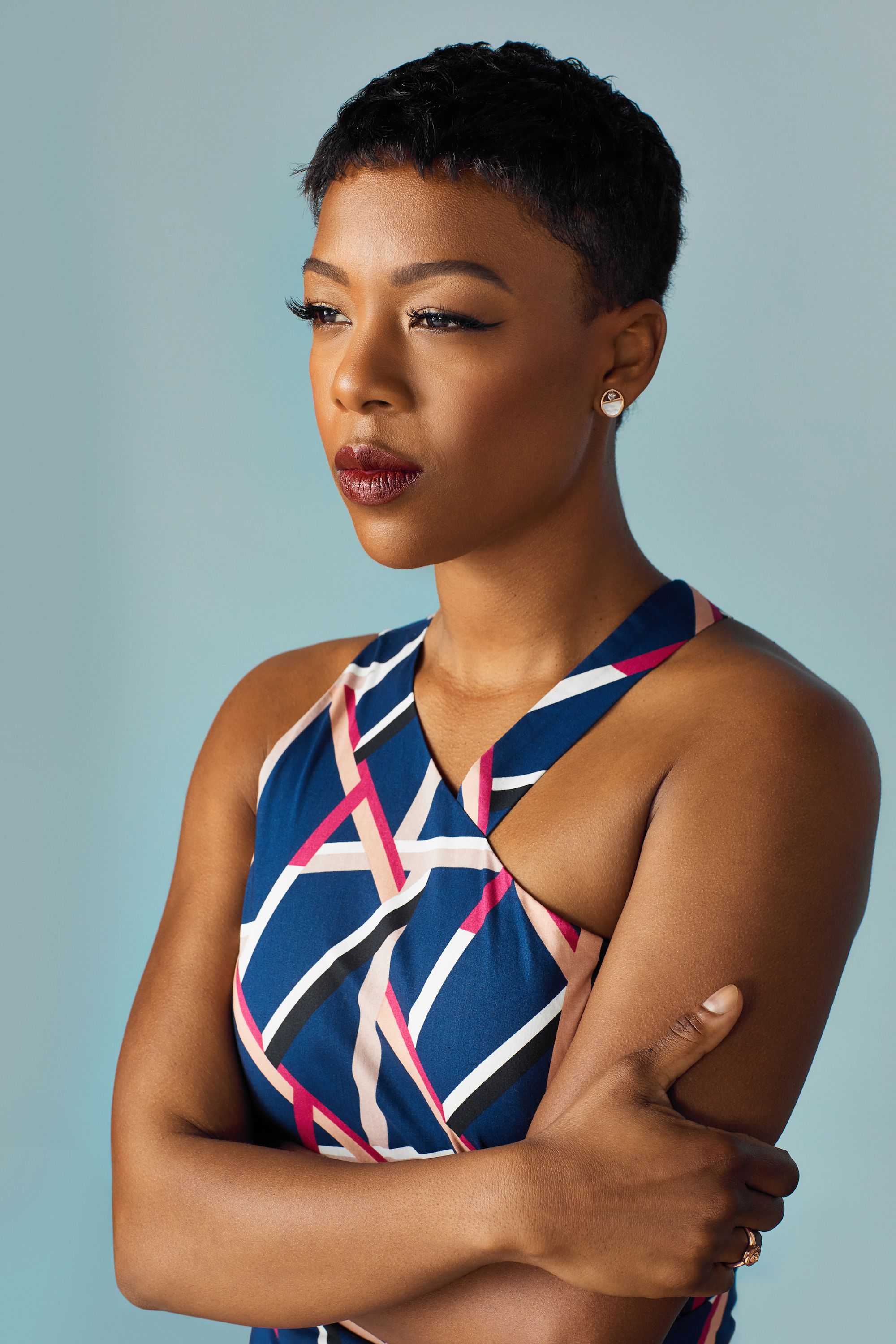 Other moments we spend with Moira are heartbreaking, too. When she picks up a girl in a bar, she says her name is Ruby—her name from Jezebel’s—which seems like a sign that she’s not feeling like herself yet. Where do you think Moira is at and what do you think she needs to do next for her sense of self?

She hasn’t been in Canada that long yet, and she’s come from a life of survival and having to protect herself. I figured that’s where it comes from, especially seeing the history with Odette; she doesn’t have the person that she’s supposed to. Even after she gives the child up, she says something like, “It’s weird to be alone,” and she mentions marriage. She really wanted that for herself, and to have found that and then to now have lost it, she has to put a shell around herself. After she’s been intimate with this woman…it’s almost like a false intimacy, thinking that you’re letting this person into your world, but you’re not actually letting them in. That’s her lesson from Gilead, having to not always show your cards, not ever having the ability to just be your authentic self, because you’ll probably get killed for it, and I think that is still in her very much.

In terms of what she has to do next, there are a thousand things. As a person who’s a total fan of the show, I want her to be back in Gilead and save everyone and be a hero. If anyone’s gonna do it, Moira is gonna do it. But also just in terms of living there, it’s hard. I think that Luke is probably a real rock for her; they are getting closer, they have sort of a sibling relationship. We’re seeing them have to really lean on each other in season 2—they lost the only thing that connects the two of them, which is June. I just want her to heal and wherever she can get that…I don’t even know if she can, she’s so damaged. But I think one of the steps is leaning into the person that she loves and trusts, and that’s Luke.

You received the Vito Russo award from GLAAD this year, for LGBT advocacy in media. Recently, you shared a casting call for a trans male actor and I wanted to know what else you want to do to work towards more diversity in TV.

Even just being able to continue to use my platform of Instagram to be able to post something like my wife’s show, a new Netflix show that they’re starting production on this summer called Tales of the City. She’s making sure that if the character is transgender, we want it to be played by a transgender actor. I’m just trying to speak out about it, and if I find myself in the position to make decisions, then I want to be giving opportunities to marginalized people. But right now I think the biggest thing I could do is use my voice, post a casting call, be able to use the GLAAD award speech to give awareness and visibility and positivity to the LGBT community. 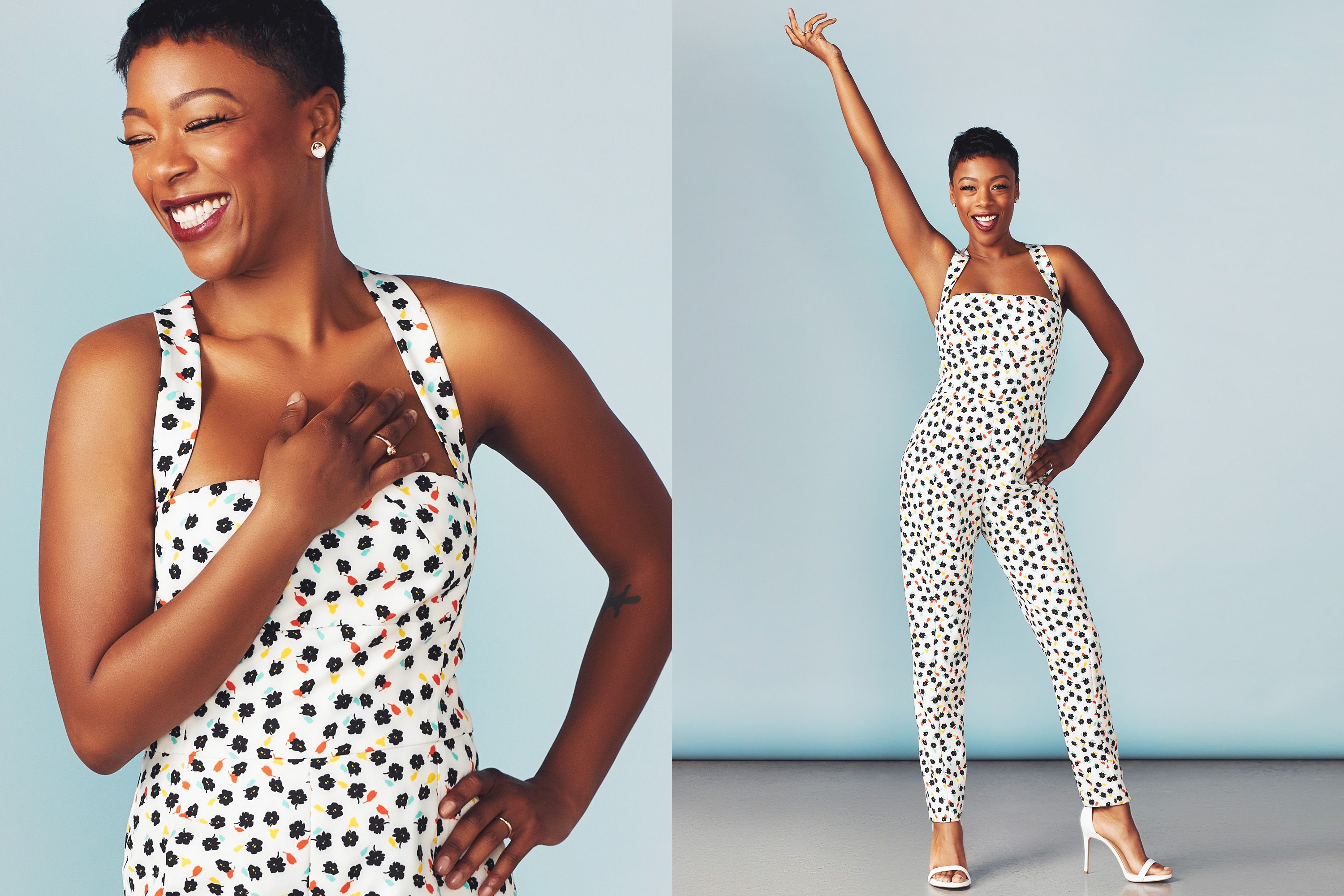 Has there been an improvement in how many roles represent queer people and people of color? Are you seeing more conversations being had about that?

I think so. When I started, the first thing people knew me from was Orange [Is the New Black] and Laverne Cox’s character was revolutionary at the time. Now we have people having conversations I would not have heard a few years ago: people trying to use sensitive language and understanding other people’s experiences. There are roles being written for people that would not have been written even just five years ago because there’s an openness now and a country-wide dialogue that is being had. People are feeling more comfortable to talk about it and I think this country is ready for visibility and representation of all kinds of people. That helped me be able to even dream—to see people who look like me doing what I aspire to do. And I think it helps everyone.

What do you hope will be the impact of this season of Handmaid’s Tale?

You know, that’s a good question. I just want people to be aware of what’s going on, be aware of the show’s relevance, have conversations with people who have different opinions from you. I think it shows exactly what happens when people don’t talk to each other, when people aren’t tolerant of each other. If things are like that, that’s where we are heading—what can we do to circumvent that?

The Handmaid’s Tale screens on Hulu every Wednesday.