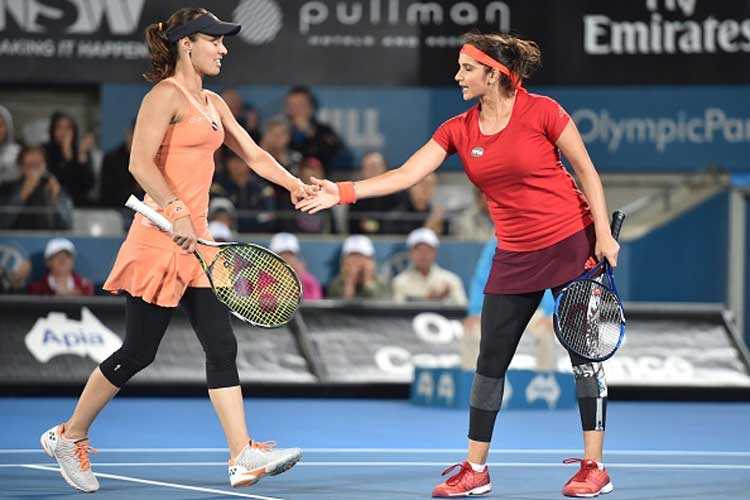 Melbourne: It was an ideal day for Indian tennis star Sania Mirza, who won both her women’s and mixed doubles matches to advance at the Australian Open in Melbourne on Saturday.

Playing on Show Court 2, women’s doubles top seeds Sania and Martina Hingis needed three minutes and only an hour to conquer Ukrainian sisters Lyudmyla and Nadiia Kichenok 6-2, 6- 3 to enter the third round at the Melbourne Park.

The Indo-Swiss combine was easily the better team, racing away to take the very first set in only 23 minutes. Overall, Sania and Martina broke the seven chances they got and their unseeded opponents apart.

During the whole second-round encounter, Nadiia and Lyudmyla could convert just one breakpoint in reply. Also, 22 unforced errors were committed by the Ukrainian women more than that of their opponents.
Later in the day, Sania returned to play with her mixed doubles match that was launching with Croatian associate Ivan Dodig on the same court. The top seeds again had a straight-set triumph, beating local pair of Ajla Tomljanovic and Nick Kyrgios 7- 6, 5 -1 in 59 minutes.

This time too, Sania’s team proved far much better compared to the Australian pair. Ivan and Sania made as many as 14 breakpoint chances, though converting just four. But that was more than enough to seal the match in only two sets. Additionally, they also hit 34 winners that of Nick and Ajla!

In comparison, only one breakpoint could be won by the local team out of the five chances they got. Also, three doublefaults during the match did not help their cause.

Ivan and Sania will take on Kazakh-Pakistani pairing of Yaroslava Shvedova and Aisam-Ul-Haq Qureshi in the 2nd round.

In juniors action, the Karman Kaur Thandi in India defeated Australian Olivia Gadecki 6- 3, 6 -4 on Court 10 in her opening girls’ singles match and certainly will face Hungarian Panna Udvardy next.

In the same category, Karman’s compatriot Pranjala Yadlapalli, seeded 10th, defeated Japan’s Mayuka Aikawa 6- 5, 4 – 6, 7 -1 on Court 5 to go into the second round.