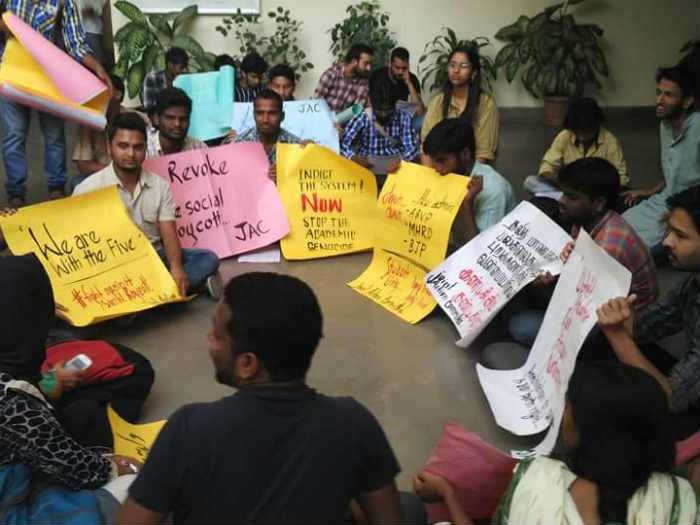 Authorities charged with abetting the suicide of a Dalit scholar at the University of Hyderabad as students clashed with authorities and security personnel, Union minister Bandaru Dattatreya clamped prohibitory orders on Monday amid an outpouring of grief and fury on social media.

Rohith’s mother Radhika sat on a dharna on the campus along with several pupils and Dalit organization leaders, saying she wouldn’t proceed until vice-chancellor Appa Rao described the motives behind suspending her son.

Hundreds of police officers were rushed to the campus as several Dalit and left leaning student groups called for a shutdown.

Before this month, the five students – all members of the Ambedkar Students Union — were thrown out of the hostel amid allegations that they were denied access to campus facilities, except their classrooms and individual workshops, on recommendation by an executive committee of the university.

Additionally they laid siege to the administrative building in demonstration.

Student groups at the university have demanded action against ABVP leader Susheel Kumar and Appa Rao – who’d lodged the first complaint against the five pupils.

The 28-year old held a scholarship under the University Grants Commission’s Junior Research Fellowship programme and came from a poor foundation.

As news spread of his death, hundreds gathered at the university and social media was flooded with quotations from his suicide note, where he composed about his dreams of becoming a writer and scientist in great detail. He also alleged that he had not received his fellowship money for several months.

“The value of a man was reduced to his immediate identity and closest chance. To a vote. To a number. To a matter. Never was a guy handled as a head. As a glorious thing made up of star dust. In very area, in studies, in roads, in politics, and in dying and living,” he wrote in the word.