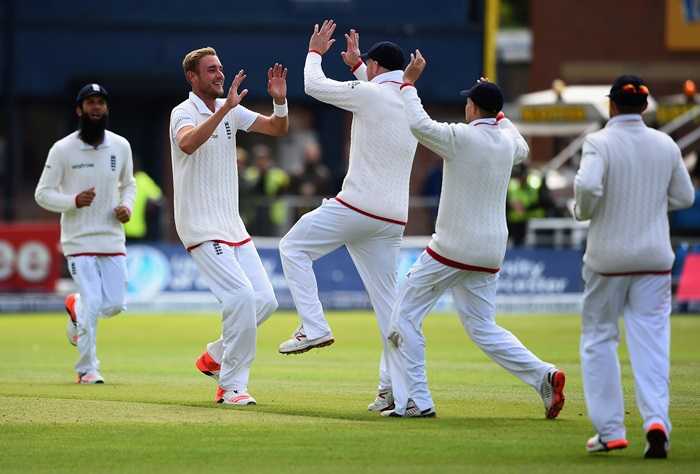 South Africa were 137 for four at the close 166 runs behind England’s first innings total of 303.

KwaZulu Natal: Two fervent spells bowled and took three wickets to give England a little advantage in the conclusion of the 2nd day of the first Test against South Africa at Kingsmead on Sunday.

“Tomorrow is a huge first hour,” he said. “We should make early breakthroughs as South Africa did now and try and get a first innings lead.

“I don’t believe anyone truly understands how this wicket will act. It’s rather a lot drier than we anticipated. In case it deteriorates a first innings lead may be critical.”

Amla survived two appeals for caught behind off Broad before edging a routine grab to Bairstow after making seven, and was dropped by wicketkeeper Jonny Bairstow off Chris Woakes.

Stokes was uncertain whether the ball had taken, an opinion shared by television umpire Bruce Oxenford after seeing several replays.

De Villiers went on to make a completed 49 before Broad had him caught behind and came back into the attack, shoving at a ball which made him off the pitch to supply another grab for Bairstow.

It was the eighth time Broad had blown off De Villiers in 11 Tests.

Broad said De Villiers’ termination was the effect of a successful strategy, with seven fielders.

“AB was beginning to take the match away from us somewhat. He’s got the power to hit great balls for four and score very fast, so we created a 7-2 strategy, nearly to say, you can hit your great shots but you’ll hit them to fielders.” said Broad.

“The leg cutter went a bit more than I believed it’d but I believe supporting him to play his shots is perhaps the strategy to get players of his calibre out.”

The lefthanded when he’d 35 Elgar, who reached 1000 runs in his 22nd Test, went to a 93-ball half century with a straight six off Ali. He’d faced 155 balls by the close, hitting a six along with five fours.