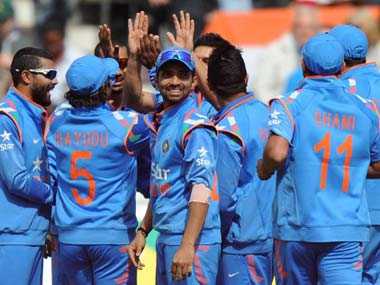 Despite a lacklustre batting performance, India managed to defeat Western Australia XI by 64 runs in the 50-over training match at the WACA. Rohit Sharma and Manish Pandey hit scintillating half-centuries, but the rest of the batsmen failed to arrive at the party as India were bowled out for 249 in 49.1 overs. Nonetheless, a fine bowling performance by the spinners, who shared six wickets between them, helped the tourists skittle the opponent out for 185.

Electing to bat, the MS Dhoni-led side didn’t possess the greatest of beginnings as they lost a few early wickets. A 88-run partnership between Rohit (67) and Ajinkya Rahane (41) helped the Indian side recover. On the other hand, the visiting team lost wickets at regular intervals following Rahane’s departure, with Porter (5-37) doing the bulk of the damage.

Reduced to 171 for six, when MS Dhoni fell to Liam O’Connor, India were fighting to allow it to be past the 200-run mark. This was when Pandey (58) came to India’s rescue, hitting three fours in his 59-ball stay, as he managed a 60-run seventh-wicket partnership with Ravindra Jadeja (26). The tail failed to wag and also the visitors could not last their full quota of 50 overs.

In reply, the hosts began cautiously against a disciplined Indian attack, directed by Umesh Yadav (1-29), but shortly hit a rough patch after losing two wickets. Yadav made the first breakthrough by discounting skipper William Bosisto (13) before Ravichandran Ashwin (2-32) sent back D’Arcy Short (10).

Rishi Dhawan (2-28) and Ravindra Jadeja (2-38) got amongst the wickets soon after as Western Australia lost their way in the chase. Jadeja stuck opener Jake Carder in front after Dhawan for 45 had cut short Nick Hobson’s stay.

Axar Jadeja and Gurkeerat Singh then bagged a wicket each to wipe off the tail.

Both the teams were permitted to play with all 14 members of their squad in the 50-over game with eleven permitted at a time to field and bat.